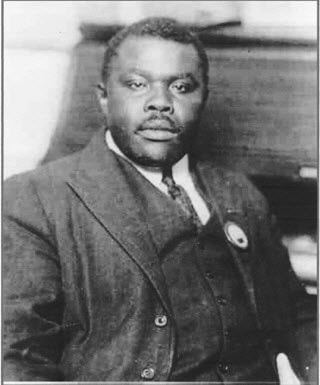 Even though in the future we may have to demonstrate love and charity to all, yet we cannot afford to do it now because we have done it in the past and it has not benefited us. We have been giving of our love and charity to others and deprived ourselves of it and we have not travelled very far on it.... We cannot start out now to practice virtues to others because nobody is going to listen to you. You have to meet the other person on his own battleground and knock him down, and when he is down you pick him up and say, "This is the way you ought to go."[8]
We do not know when Christ will return, Garvey said, and in the meantime "we are living down here, and the other fellow has part of what belongs to us [and so] we are going to suspend the idea of brotherhood and talk something else.
I believe in the brotherhood of Christ when all of us get into heaven. That's time enough for all of us to be brothers in Christ.... As long as some one, I say, is depriving us of our portion and our job, there cannot be any talk about brotherhood.... There is no brotherhood when one man is robbing the other fellow, and that is what is happening to Negroes now.... If you will stand up and let him take it from you, and then talk about his being a brother to you, when he has gone away and left you without a nickel with which to buy bread, then you are crazy, indeed; for... you will simply stay there and die unless you will go after the other fellow and fight for what is ours. And that's the kind of man the white man is.... They have no mercy and no sympathy, and anywhere they can get wealth they are going there and will take it....
We are going to show them the quality of mercy--after we get even with the "crackers." I don't believe there can be any dispensation of mercy until you "get even" with the "other fellow."... I want to feel satisfied that he feels what I felt, and then, after that, we can call it quits, for then we can appreciate each others' feelings.[9]
Blacks would remind complaining whites that "we are giving to you no more than you give to us. Give us a kick and we will return the kick; give us a smile and we will return the smile--and you know that nobody can smile like the Negro. He smiles broadest and he fights longest." The oppressed, Garvey said, must "organize in terms of self" in response to "similar kinds of organizations on the part of their oppressors." Black practice of racial self-interest "finds its highest justification in the practices and methods of their oppressors." In terms virtually identical to those used by white radicals, Garvey proclaimed that "those who are slaves must strike the blow for their freedom. In all the history of the human race I have never heard of a race begging for their freedom and getting it; they have had to fight for their freedom [before] winning it." The Negro was formally emancipated but was "not satisfied with the kind of freedom he has now; he wants a larger freedom...."[10]
Commenting on British demands for control of the ex-German colonies in Africa, Garvey asked:

you have doubted yourselves for three hundred years; you have believed in the almighty potency of the other man for five hundred years; you have believed God to have created you to the condition that you now live in. It is a lie, it is not so! God never created you to an inferior position. He made you the equal of all men.... All of us are entitled to this great inheritance. All of us were created lords of the creation, and whether we be white, yellow, brown, or black, Nature intended a place for each and every one.... Four hundred million Negroes shall shed, if need be, the last drop of their blood for the redemption of Africa and the emancipation of the race everywhere.[48]
Garvey and other UNIA leaders constantly referred to a Biblical verse (included in the Universal Negro catechism): "Princes shall come out of Egypt, Ethiopia shall soon stretch out her hands unto God." Garvey assured his followers that "You are the princes that shall come out of EGYPT. Everything under the sun is possible for you." But first, "we must remake ourselves, lift ourselves from the conditions of slavery, of being lackeys, parasites or wards, to the position of real men, men of initiative, men of brawn and power, men of great accomplishments." Speaking in Panama, Garvey again used a Biblical metaphor, saying that "I am here now in Colon to dig up those who are practically dead, and make them new."[49] Garvey extolled himself as a man of average ability who rose above his circumstances as could all other blacks, reminding an audience in his native Jamaica that he had been born in a society that told the black man
that he must be merely a hewer of wood and carrier of water--a servant looking up to the white man as servant and master--who was born to believe himself inferior to other races--born not to have hope for himself. Under this environment I was born myself--you all know of this. But I did not confine myself to this environment. I refuse to be enslaved by an environment which keeps a black man at the foot of the ladder. I was entitled to climb as any other man, be they white, yellow, or black. I was determined to climb the ladder of success, equal with every other man because God created all mankind and gave mankind the overlordship of the world...[50]
Garvey's power lay in his ability to persuade hundreds of thousands of Negroes, on every continent that blacks inhabited, of the truth and practicality of this vision. Such power led an American secret police agent to complain that "there will eventually be trouble, not so much from what [Garvey] says, but what the people will think about themselves as a result of his talks." William Pickens, a prominent NAACP official, likewise predicted that "the idea [Garvey] has injected into the Negro masses will remain, even if Garvey shall be jailed or hung."[51]